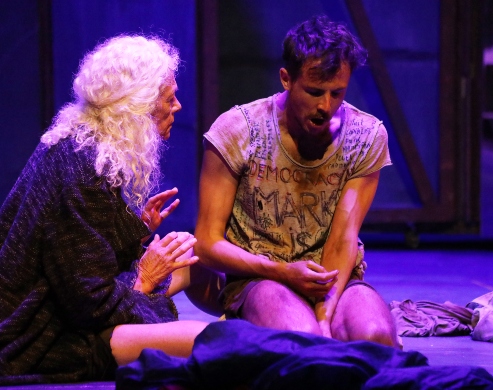 Intentional Tools for Rehearsals
When you get the opportunity to work with some of the great actors of all time, prepare to observe and write down.
I have had the privilege to work with someone like Anna-Mart van der Merwe who is not just an exceptional actress but an exceptional human being. I think this is what adds to her being such an incredible actress. No drama or sideshows, you only get the truth and hard work.
I have seen her do a lot of things during rehearsals, but one two things that stick out is this:
She puts on shoes that will more or less be the same kind as what her character might wear in the play during rehearsals. This changes her posture, the way she moves across stage and it gives her a type of structure or boundary in which she finds freedom to create.
Find shoes you have discussed with the director that might be the same as what your character might wear and start using them during rehearsals. Don’t let it become the main focus. Nobody else has to know that you’re even doing or have to understand why. Just put them on and focus on the day’s work.
She stays “in it” literally all the time. By this, I mean, she never breaks out of a scene when she is not speaking or the focus of the scene. She always finds things to keep her busy, without distracting the audience or the actors who are the focus by this point. She only breaks out of it when the directors stop the scene to fix a moment or blocking; otherwise, she stays “in it” till she walks off the stage.
Find little moments or “business” that you think add’s to your character. Maybe it’s fixing your hair in a reflection on a glass table you’re sitting at while on the other side of the table the scene continues. Perhaps you observe another character’s outfit if you are “posh” and judge it in your head while the scene continues. Again, I don’t know how, but Anna-Mart vd Merwe keeps on listening during her “in it” moments, she doesn’t miss a cue because she was too busy with another stage play, she stays “in it” but keeps on listening.
There is so much more I can share on what someone like Anna-Mart does, it’s an Acting Class on its own to watch her rehearse. Always be open to other actors processes and what they do to get the best performance they possibly can. Write the observations down. Try them next time.
It’s a toolbox you need to fill. You can have the same drill as another actor, but it’s impossible that you’ll use it in the same way or that the end product will look the same; so no, it’s not stealing it’s creating.
How did you find the technique/tool/advice? Did it work for you? What was different this time? Please share with the tribe and let’s keep on creating beautiful, honest and memorable performances. Let’s execute our best selves!
Kind Regards
Edwin van der Walt