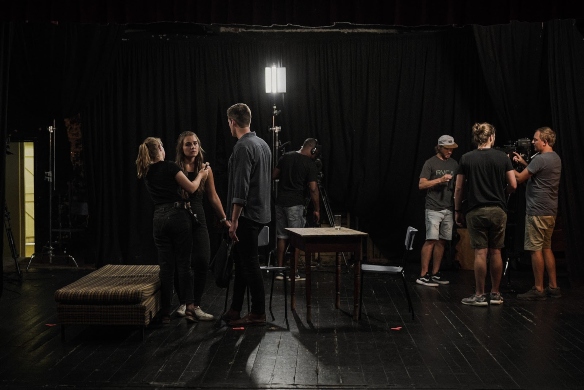 I Can’t Believe He Just Read His Lines When The Camera Turned On Me
A smirk appeared on the side of my face as I wrote this heading. I’m smiling now, but when this happens… It’s not fun.
I have been privileged enough to have worked with extremely generous actors and extremely selfish actors. After experiencing a situation where you realize how difficult it is to give your best when working with selfish actors you truly can get scared for life.
I did a film in which I had to do a scene which was an emotional scene for both of the characters in the scene. That sentence could have been said much easier but you know what I mean. So, we first did his take. I have been taught by my mentors that when the camera is not on you, you give eyeline and still the same truthful performance as if the camera is on you.
So, I did just that. Gave him as much as I could. “Turning around” was called by the assistant director, which means the camera will turn and it will face me. This is my close-up. This is the shot where you would like to give your best. “Sound… Speed…. Camera… Rolling…” As the AD gets everyone ready to go for a take, Mr. Actor here opposite me pulls out his sides (the scenes you’re in for the day cut out from the script and on one document) and gets ready to give me… well, a reading.
So, I just went with it. I locked an eyeline on his hairline where his eyes more or less would’ve been and did the scene. I gave my best but I was a bit disappointed. I can add a swear word of how disappointed I actually was. But, the show goes on, we don’t have hours and hours to shoot this scene, we need to knock these scenes down as quickly as possible.
On that day I was so glad my mentors taught me to try and be as generous as possible when the camera is not on you because I felt what it felt like not receiving anything to react to on screen. And that is our job, to react to what the co-actor does or says.
Tool: when the camera is on your co-actor, be generous, give them a performance which will help them give their best performance. Try and make them look as good as possible. You’ll be surprised how just focusing on your co-actor will give you the connection and performance that leads to truth and strong choices. You’ll truly listen and by the time the camera turns, you’ll be in the habit of just finding those triggers that stimulate your response; leading to honest reactions and a joyful experience on set.
With time you’ll find a balance when it comes to emotional scenes as to keeping those tears or screams for your close-up but also giving an honest performance and more than enough when the camera is not on you. Be a generous actor. This helps both of you to create an honest and interesting scene.
“I fight cynicism. It's too easy. It's really boring. It's much harder to be positive and see the wonder of everything. Cynicism is a bunch of people who aren't as talented as other people, knocking them because they make them feel even more untalented.”
― Ewan McGregor
How did you find the technique/tool? Did it work for you? What was different this time? Share with the tribe and let’s keep on creating beautiful, honest and memorable performances. Let’s execute our best selves!
Kind regards,
Edwin and NovieGuide